How does Saltbox function ?¶

Once the downloads are complete, Sonarr & Radarr will move [or copy in the case of torrents] these downloads to your server's /mnt/local/Media/ folder[3] and send a notification to Autoscan.

AutoScan will, in turn, tell Plex to scan for the newly downloaded TV Show or Movie, by only scanning the specific season or movie folder. This will

Cloudplow will eventually[4] move everything[5] from /mnt/local/Media/ to a folder named Media on the remote cloud storage, thereby reducing the storage used on the (local) server.

During this migration, the media files will continue to be accessible to Media Servers (e.g. Plex) because the remote cloud storage (e.g. Google Drive) will be mounted on to the server as if it were a local drive. This is accomplished with an Rclone VFS mount pointing to the cloud storage, and a union of that mount with the server’s own local storage (accomplished via mergerfs). 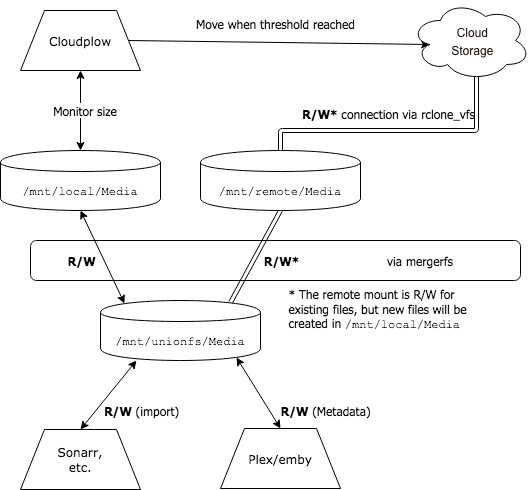 1 Some of the applications above can be replaced with similar apps.

3 The move to /mnt/local/Media is indirect; Radarr/Sonarr are using /mnt/unionfs/Media, and they move the file there, however, /mnt/local is the only writeable part of the mergerfs [for the purpose of creating new files], so the newly-written files will be placed in /mnt/local.

4 By default, Cloudplow will check every half hour to see if there is 200GB of data staged in /mnt/local and if there is, all that data is pushed to your Google Drive. This threshold can be adjusted as needed in the Cloudplow config.

Next, let's discuss the Prerequisites for Saltbox installation.