It is recommended to assign all your disk space to /, as all of your imported media and app data will be saved to /mnt/local/ and /opt/, respectively. This allows your application metadata and your staged media to make the most use of your available disk space without worrying about partitioning.

Note 1: ALL folders/paths mentioned below, and elsewhere on the wiki, are CASE SENSITIVE (e.g. Google Drive: Media not media, Movies not movies, TV not tv; Plex Requests: /logs not /Logs, etc). This is important, or else apps like Plex, Sonarr, and Radarr will not be able find your media.

Note 2: This wiki uses ~/ interchangeably with /home/<username>/, which is defined as /home/{{user}}/ in Ansible syntax (as used in settings.yml). So if your user name was seed, your ~/ path would be /home/seed/.

For this reason it is important that you run commands as the appropriate user as you go through the wiki. 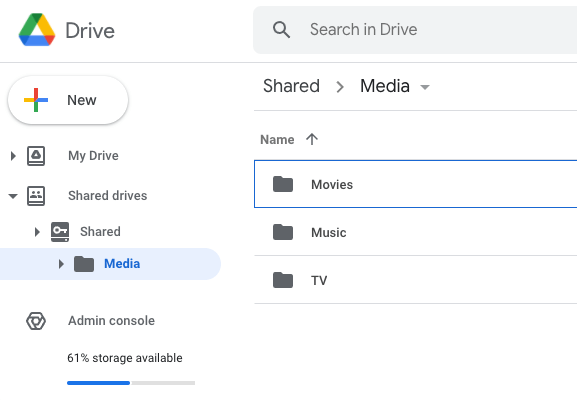 There may be other mediatype directories here depending on your specific setup. The current automated rclone setup creates several more [Movies-4K, Books, Anime, and so forth].

Note: If you would like to customize your Plex libraries differently, see Customizing Plex Libraries.

Note: Make sure /mnt/local/ has enough space to store the imported media (before cloudplow is able to move it to Google Drive).

The Dockerized app (e.g. Plex) will "see" the Docker Path, but that path will actually be the Host Path on the server.

By default, NZB and Torrent downloads are stored in /mnt/local/downloads/nzbs/ and /mnt/local/downloads/torrents/, respectively. However, this can be changed to point elsewhere (e.g. a second hard drive) by editing the settings.yml file. But regardless of the download location chosen, the Docker Path will always be the same.

Note: It is advised to leave at least 100GB free on /opt for the storage of Docker data.

Any container that requires disk access¶

Every container sees any path inside /mnt the same as the host and same as any other container.

Next, let's discuss the inventory system for customization.